Free Fire features a plethora of skins, Bundles, and items but many skins have a premium look and are radiant. Which can be used on the battlefield, like the Free Fire AK 47 Flame Draco skin. The first-ever revolutionary gun skin is coming to Free Fire! Engrave your name into the elite list of legends with the foremost powerful and epic Blue Flame Draco AK gun skin – coming soon to Free Fire on the 25th of October. 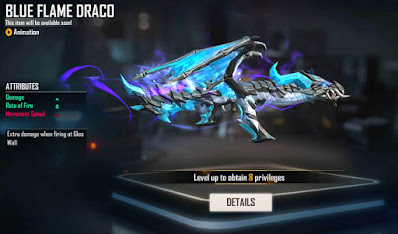 Now you can fulfill your dream of being a dragon tamer in the realm of Garena Free Fire. The game is about to release perhaps the most powerful and realistic Blue Flame Draco AK skin that you have ever seen.

First-revolutionary gun skin is coming for Free Fire! Put your name on the elite list of legends with the most powerful and epic AK-47 Blue Flame Draco skin – coming to Free Fire soon on 25 October. ”

This gun will be added to the game on 25 October. No details have yet been revealed as to how players can take advantage of this.

There are in total 1 to 7 levels to be upgraded and 5 new exclusive effects and features of the Blue Dragon AK47 skin in Free Fire. 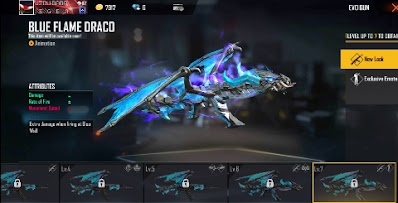 To upgrade the skin, users must have Dragon Scales. The developers have recently added a check-in event to Free Fire which will run from 25 October to 2 November. Gamers will be able to claim 3x Dragon Scales every day.

In addition, another upgradeable skin, named UMP Booyah-Day, will be available to players. They will be able to get UMP Skin by just logging in on 25 October, which is the last day of the Booyah-Day event.

How To Get Blue Flame Draco AK Gun Skin

In the new Faded Wheel, players would have to spend diamonds to obtain the Blue Flame Draco. It will be available from 25th October till 7th November. There are a complete of 10 items within the prize pool, with the skin being the Grand Prize. 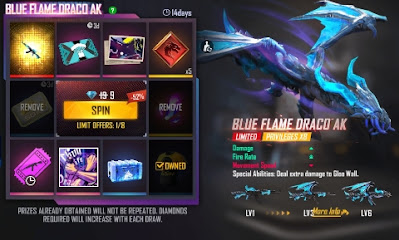 The users would have to select two rewards that they do not wish to obtain from the pool. Prizes they receive will not be repeated, and hence it increases the chance of getting the skin. However, the cost of every subsequent spin increases. The price for spinning is as follows – 19, 19, 39, 79, 139, 199, 399, and 599.

Hence, the players are, in a way, guaranteed to get the Blue Draco skin in 1492 or fewer diamonds, which is quite good considering its nature.

The skin has a new unique Kill Effect, Firing Effect, Hit Effect, Kill announcement, and more, making it quite a peculiar skin.

Thanks For Visiting Us Guys