Free Fire has the biggest collection of weapons like guns, graned, pistols, and many more. For players to choose from. The title also has a variety of nice-looking weapon skins that players can buy from the in-game store or obtain for free via different events by different servers. 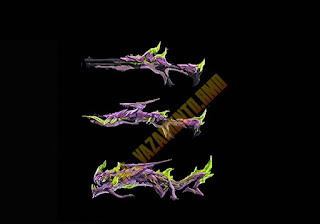 One month back, Free Fire released the first upgradable/Evo shotgun skin M1014. Free Fire M1014 Green Flame Evolution skin has a total of 7 levels and it will unlock 8 different effects like kill announcement, hit effect, and more cool effect. You will need about 2000 Diamonds to fully upgrade this gun skin to the max level.

At Level 1, the skin still looks is so cool with the Green and Purple colors effect.

At Level 2, you will unlock the Green smoke effect on the back of the gun.

At Level 3, the skin will have 2 cool wings.

At Level 4, you will unlock the bullet hit effect and bullet effect of the gun.

At Level 5, you will unlock the kill announce effect of the gun and melt, which melts the enemy with poison.

At level 6, the skin is almost complete and we can clearly see the shape of a dragon. You will also unlock the ability to hit more damage to Gloo Wall its crack Gloo Wall fast as comper to another normal gun skin, which is the same ability as the AK Blue Flame Draco skin.

At Level 7, you will unlock an exclusive cool emote of the M1014 Green Flame Draco Evolution skin. 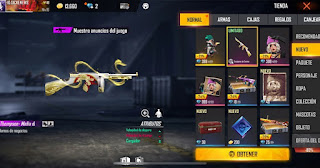 Free Fire Announce new event in this event you obtain a new Thompson gun skin this gun skin looking is so cool golden color and white color combination are so good this event is now available in Latam server and this event is coming soon for another server shortly.