Free Fire is known for releasing a lot of new events every day to give players free rewards and new character and new in-game items. Just like event new evo gun, new Clash Squad Ranked Season, new character coming in-game, there will a lot of Free Fire upcoming updates and event in OB29.

The next Clash Squad Ranked Season 8 of Free Fire is scheduled to release on August 6, 2021, at 02:30 PM IST. The previous season will end just a day before. In Season 7, if you work hard and reach the Gold-III tier, you can claim your free Golden AK47 before Season 7 ends. 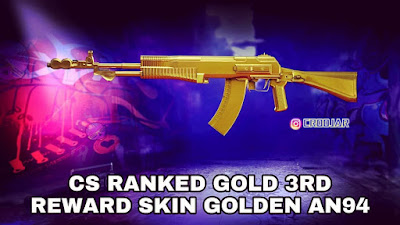 So guy’s this is our next Free Fire Clash Squad Season 8 Gold 3 ranked reward free golden AN94 gun skin in August, 2021.

Thanks you for visiting our website and also come back for new upcoming updates and event information about Garena Free Fire.