Free Fire new character Justin Bieber this is a most popular singer in USA now it’s coming to our Free Fire game as character and also come with special ability. 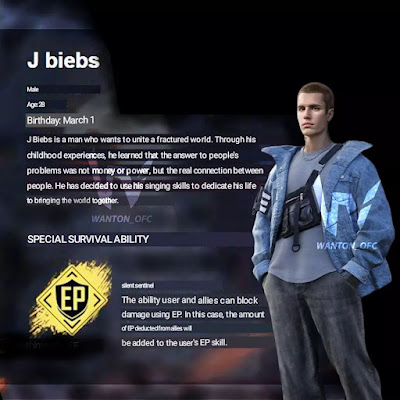 Justin Bieber is a who wants to unite a fractured world. Through his childhood experiences he leer red that the answer to people’s problems was not money or power, but the real connection between people. He has decided to use his singing to dedicate his life to bringing the world together.

Free Fire new character Justin Bieber ability called name is ”Silent Sentinel” and it’s working like this, The ability user and allies can block damage using EP. in this case, the amount of EP deducted from allies will be added to the user’s EP skill.

Thanks for coming to our blog and also come back for more information about the Free Fire.